After much discussion, John and I came to the conclusion that after one more day at Valley Bore and mucking about, sorry, collecting mineral samples in the  Harts Range we would move on to the Henbury Meteorite Site.

As usual, we set off early to Harts Range, armed with information from old Walter Smith and prospector Linz.

As we intended to leave early the next day we said good bye to Walter Smith, his wife Mabel and the rest of his ‘mob ‘ who lived in their Gunyahs not too far from our camp.

I let Walter know that I’d stay in touch with him through Eddy at the Police Station and he seemed please at the thought.

Once on our way, our first port of call was an area named Mud Tank which was known locally as a place to dig for zircons.

The ground at Mud Tank was pockmarked with holes from previous digs and John pointed out that as I was considerably younger than he, it was my job to do the digging, particularly as the long handled shovel was part of my kit. Always generous to a fault, John offered to take the following image.

DIGGING FOR ZIRCON AT MUD TANK.

I must confess that I was digging in a hole mostly dug by some other prospector.  After about an hour’s hard labour I gave up digging and helped John sift through the fresh dirt. We found absolutely no zircons or anything else of geological interest and moved on into the range proper.

The annual races at the Harts Range Race Course rival many such Territory race meeting and have very high attendance numbers.

Fortunately, or unfortunately depending on your point of view, the course was deserted as we passed by.

As I’ve mentioned previously, Harts Range was and still is a geologists dream.   Mineral formations are everywhere from lengthy  exposed quarts veins to garnets, large and small  lying everywhere  and unusual force formed shapes and sizes of crystals just waiting to be collected.

My strategically placed peological kick highlights one such interestingly  shaped short run of quartz and other minerals. 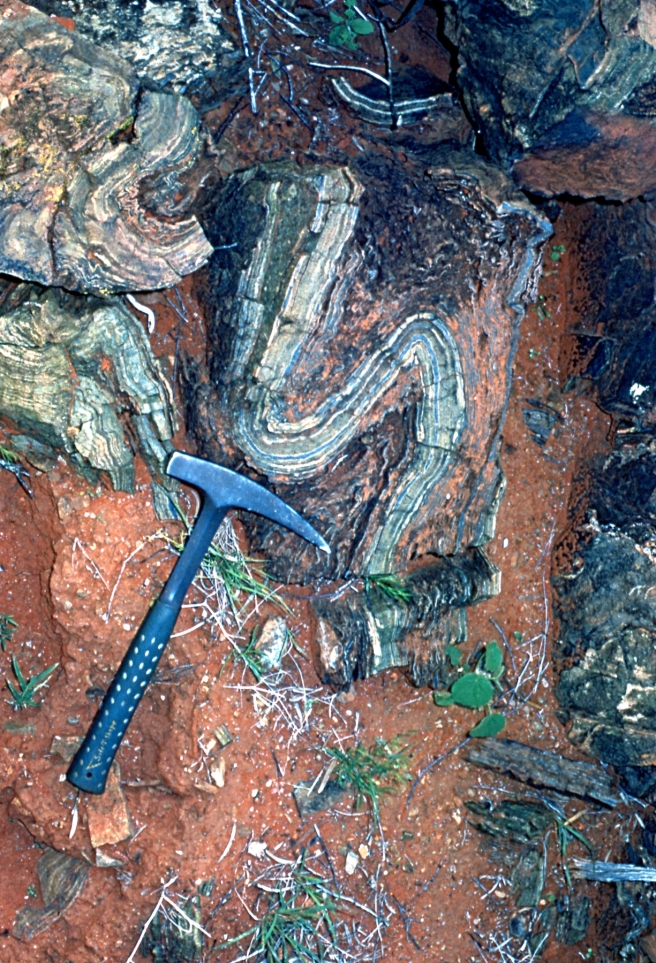 I collected quite a few nice garnet samples, the slides of which are amongst the hundred or so I can no longer find.  Unfortunately because over the years I’ve given all my garnet samples away, I can’t photograph them now to show you.

Fortunately this morning , although the slides are missing, I was able to photograph two of my remaining samples from that great day on the range.

The first is a good example of the quartz crystals that are strewn across the range. The second/third is a large lump of either Hematite or Kyanite, I can’t remember which , or perhaps it is neither of the two.

The next two images are of my mineral sample I’m unable to positively identify. John collected many, many samples but most importantly, he located an enormous feldspar crystal, well over three feet in length that required both of us to lift and, get back to the Landy.

Our work done, we called into the Police Station and bid farewell to Eddy, his family and Eddy’s Aboriginal workmate and tracker.

Farewells completed and much later that day, with assistance from Linz at Bonya, we crated up the sample, said hoo roo to Linz and his wife Joan and returned to Valley Bore to pack up for the last time, ready for an early departure en route to Henbury via Alice Springs.

That’s it for now so,

Hoo roo till next time.