The other day, an old mate from the Sydney Landrover Club and i were reminiscing about the long trips into Central Australia  we used to do.

Our yarn reminded me that years ago I was at a meeting of the Club (the LROC as we used to call it) when the Club’s President announced  that the Sydney Technical College( now the University of Technology) was mounting an expedition into the Simpson Desert and were needing volunteer driver/cooks with their own four wheel drive vehicles to assist the expedition.

I remember that at the meeting it was indicted  the aim of the expedition was to find and film Australia’s Night Parrot, an extremely rare bird that had not been reliably sighted since the late 1800’s.

The students and lecturers were to meet up with us at a spot on the Plenty Beef Road  near Jervois Station in the Northern Territory, about 200 miles north east of Alice Springs at a date, if my recollection is correct, early in May,1973.

Those memories caused me to hunt through my slide archives and I found just on 200 Kodak ASA 25 slides that I made during the expedition. Took me nearly all day yesterday to cull them and scan the selected 144.

No need for panic, you are not going to have to wade through the lot.

Our little band of volunteers didn’t have much information about what to expect but it didn’t matter, for us it was just another trip into the middle of Australia with the added opportunity to learn about the mysterious Night Parrot and ‘meet new people.’

In our planning for the trip,  we decided to travel via Bourke in NSW, then Mt Isa and Urandangi  in Queensland then down the Plenty Beef Road to Jervois in the Northern Territory to meet up with the students and the rest of the expeditioners.

We had quite a few adventures of our own en route. Miscellaneous stops for routine welding of cracked chassis, failed electrical systems, fuel blockages, CB radio failures and of course, tyre and tube repairs.

Eventually we reached Jervois a day or so early and eventually teamed up with the expedition proper.

First up, one of the local identities, Linz, a prospector  who lived at a place  on the edge of Jervois Station had offered his hospitality and a welcome BBQ for all of us.

I can’t remember the exact numbers but there were at least 30 to 40 people all together.

By the way, Linz and I are still mates, correspond regularly and for many years post 1973 I was an annual visitor and  accompanied him on his prospecting around the Simpson Desert. That is a story for another day. Perhaps.

Anyway, the ration truck with our supplies had not yet arrived from Alice Springs and our generous host catered that night for the horde of visitors.

You can imagine the  surprise when  people who had never left the City of Sydney arrived at our host’s camp and saw our raw freshly killed evening meal hanging in the sun to rest  prior to being cooked on an enormous hot plate.

At the BBQ, our little group of volunteers learned the an ornithologist and a herpetologist from the Australian Museum in Sydney, a geologist from the Sydney Tech and two doctors were part of the expedition’s professional support team.

We also learned that the majority of the students were ornithologists/herpetologists in the making and the remainder were interested in geology.

Roy, Leon and Ted opted to support the first group and I selected the geologists. As it transpired, it was a great choice.

The geology group set up camp at palace called Valley Bore. The site was selected as it was close to the Harts Range, described to me as a geological scrap heap. That’s my green tent in the foreground.

The Harts Range is a rugged landscape with few tracks and the rocks are sharp and unforgiving. Using my  Landrover  I ferried the geology group to various fossicking sites around the range.

One for first places the geology students visited was known as Red Rock Valley because of the prevalence of garnets at the site. In fact garnets were just lying about just waiting to be collected.

I’d long been interested in geology and had done a course in Sydney during which time I purchased a Geological Pick. Here it is next to an interesting rock formation. I’ve still got the pick, now safely stored away in my man cave in case I ever need it.

It’s rough country out there and accidents do happen. One girl in the geology party suffered a nasty face first fall and required medical treatment from one of the expedition doctors.

There is no privacy in an outback open air surgery and I was able to take this photograph of the Doctor about to administer a tetanus injection by the light of the camp fire. 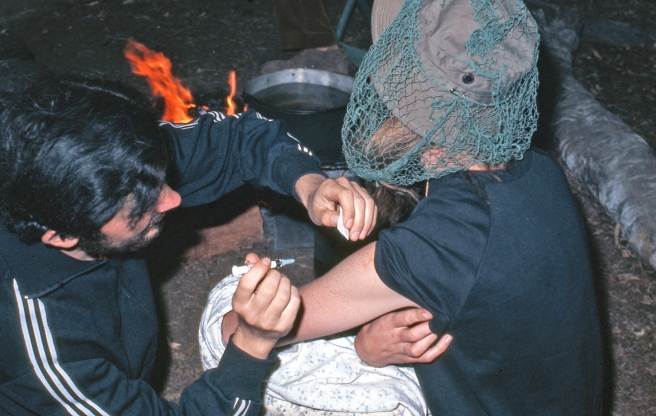 Dr Dave and I are still good friends after all these years and he always calls in when passing Cassa Creakingbones.

All of the expedition activities took place on edge of the Simpson Desert and one thing that stands out in Central Australia is the sense of humour of the people who live there as evidenced by the sign on this Station gate which reads’ Shut this gate please. Don’t knock it off.’

In the Aussie idiom, ‘knock it off,’ means ‘steal it.’

Talking of local idioms here in the Land Down Under, Station means what Americans call a Ranch.

Picking the geology group was a wise choice as after three weeks when the expedition was coming to a close, John Gorton, the geologist mentioned he was heading off to the Henbury Meteorite Site near Ayres Rock ( now known as Uluru, its Aboriginal name) and inquired if I was interested in accompanying him. Of course I said yes.

Thats a story for my next blog in a day or so.