Our little group settled in at Valley Bore and waited patiently for the rations truck to arrive from Alice Springs.  We had no idea what goodies waited us and when the truck finally arrived, if my memory serves me correctly, we were all bitterly disappointed.

Here we are busily unpacking and sorting through the packages.

Valley Bore obviously was named after its bore which required service from time to time. The station owners had built this little shelter complete with verandah for the workers who occasionally visited the bore and here it is, complete with blow ins.

From time to time our little camp had unexpected visitors and because they were so used to humans we wondered from whence they came. That’s a story for perhaps the next part of this little series.

On another occasion the two regular four legged visitors turned up accompanied by two Aboriginal men and during a yarn with them we learned where the mules and their two Aboriginal companions hailed from. Again, that’s a story for later on.

One day we ventured around the various water sources and saw how the station utilised the artesian bores powered by the windmills. As it wasn’t practical to turn of the mills where then tanks were full, an overflow pipe either led to an open trench as in the image below or to an above ground trough. 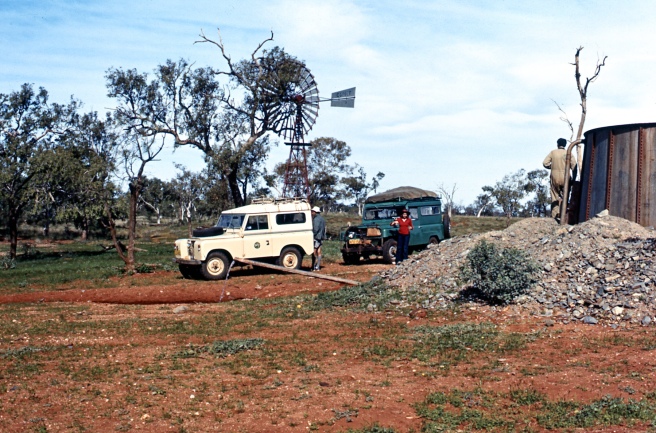 Similarly, when the tanks were full to the brim, the birds enjoyed unhindered access .

Not every local inhabitant enjoyed a continuous supply of piped water as they moved around the country side. A couple of us were privileged to accompany a local Aboriginal man to some rock holes where a supply of drinking water  was accessible if you knew where to look. It was fascinating to see him open the hole and there, sure enough was clear water. Our guide didn’t wish to be photographed facing the camera hence the following  composition.

At Valley Bore we had a continuous flow of water and we could have a shower whenever the mood took us. If nudity offends you can ignore the following image of an expeditioner partaking of his ablutions. Name not supplied to protect the  innocent. 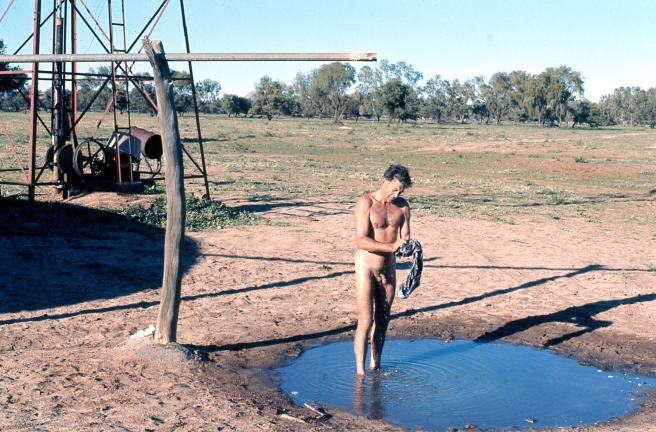 From the hills near our camp there were views of a different sort.

it’s interesting to note that the names locals use to identify various features such as large hills are often the names of local characters and not necessarily names recognised by the Geographical Names Board.

Well, we’ve arrived at a point where the expeditioners are preparing to head for home.

The few who joined the geological group learned a lot and collected many samples.

For those who were part of the ornithological group, they were disappointed as they failed to locate a single trace of the Australian Night Parrot.

They were not devoid of excitement though. One of their group tried to catch a snake believed to be a deadly King Brown and was bitten on the hand by the reptile.

Fortunately for him the other Doctor on the expedition had a small supply of antivenin which he administered on the spot.

No Flying Doctor service was available so Leon made an emergency dash with the patient and attending Doctor into Alice Springs Hospital where further medical intervention saved the life of the victim.

Unfortunately from a photographic point of view there was no photographic record made of this incident. It would have been great to be in both places at once.

After the appropriate farewells, Leon, Roy and Ted  together with the rest of the expedition headed back to Sydney.

John Gorton, the geologist and I stayed a little longer then headed off towards the Henley Meteorite Site.

More about that in a later blog.