Any owner of an Harley Davidson motor cycles is welcome to join the Harley Owners Group. HOG as it is known is a world wide club for Harley owners and consists of Chapters associated with a specific Harley Davidson Dealership.

In Australia, annual State HOG Rallies are held and a National Rally is also an annual event. Traditionally, participation in these rallies is restricted to HOG members and their specific guests.

2015 saw the Annual HOG rally conducted in Tamworth, a large regional city in New South Wales. The rally was a great  success and spawned the idea of a National HOG rally ,open on specific days for riders of any brand of motor cycles.

The name coined by Harley Davidson Australia for the event was Harley Days.

The 28, 29 and 30th October 2016 were designated for the event and the chosen site was Stuart Park in the seaside city of Wollongong, New South Wales.

Friday the 28th was designated specifically for Harley Owners Group members and the other two days were open for everyone.

In order to access the HOG member only events, registration was required and scannable tickets were issued.

As SWMBO and I  waited outside for the arrival of some friends, it was apparent that the day’s attendances would be strong as the crowd began to increase as the 10am opening time drew closer.

Once inside the park, the grand scale of the event was evident. Harley owners in their distinctive HOG paraphernalia where everywhere. Vendors of every conceivable Harley part, collectible,  clothing and memorabilia were in abundance.

In pride of place was the Harley Davidson World pavilion containing a great array of Harleys and the new most powerful standard Harley Davidson engine ever, to be rolled out on selected 2017 models.

With our friends we wandered around the exhibits and enjoyed the ever present sound of the rumble of hundreds of Harleys as they left the park  to participate in organised rides around Wollongong  and its environs.

We were particularly interested in the world’s fastest Harley Davidson, recorded at some phenomenal speed on the salt flats in Utah in the USA. 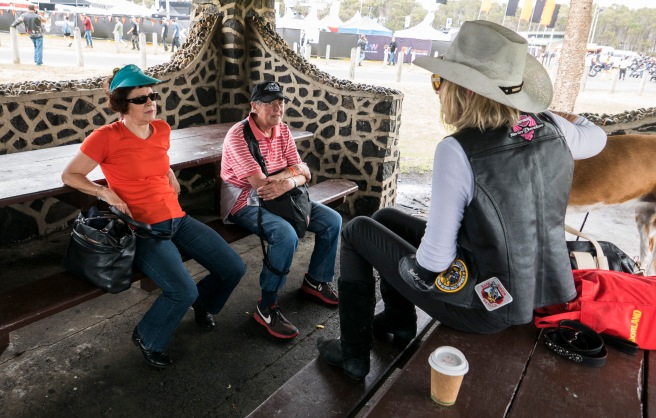 SWMBO WITH FRIEND DEBBIE CHATTING WITH A MEMBER OF THE NSW HOG CHAPTER OF WHICH I’M A MEMBER.

At day’s end, the official number of bikes was stated to be a roughly 1,500. To me it seemed a bit on the conservative side as there were hundreds of Harleys and other marques parked in the streets around the venue. It will be interesting, when the event is reviewed by the organisers, to learn the final number of attendees and motorcylcles.

One of the great things the five of us noted was the large number of female riders present and participating in the organised rides.

Ladies of Harley as they are known form a integral part of every HOG Chapter and are fully integrated into the management and organisation of the entire Chapter.

As an example, for quite a number of years, the Canberra Chapter in the Australian Capital Territory elected a Lady of Harley as the Chapter Director, the HOG nomenclature for President.

Additionally, many Ladies of Harley become Road Captains and as the name implies, organise, lead and control Chapter rides.

By the time our little group had visited all of the exhibitors, viewed multiple Harleys, spoken to many, many vendors and Harley Owners, it was time to leave Harley Days and make our way home.

Will Harley Days become a permanent fixture on the annual HOG Rally program? Only time will tell.

On a totally different note, all of the above images were captured either on my iPhone 6s or my Panasonic DMC-LX100 which sports a Leica lens.

There has been no post processing except size reduction. I think you might agree that there is very little difference in image quality and it is difficult to determine which camera made which particular image.

So there we are. Another interesting motorcycle/photographic day.