Last Tuesday morning about 3.30am, my wife woke me to let me know that the tiled floor in the ensuite was wet. On inspection I found that not only were the tiles wet, but so was the carpet in the bedroom, the hallway, the sewing room and the large built in wardrobe in the main bedroom.

Water was gushing from inside of the vanity and I saw that the hot water hose leading to the was basin tap had ruptured. Luckily the stop cock was near at hand and when the water ceased to flow the true extent of the inundation was easier to identify.

Our insurance company provides  a 24 hour claim service and by 4am I was on the phone talking to a most helpful staffer in the call centre. As I listened in, I heard her contact an emergency water damage recovery service and advise them of our problem.

The staffer advised me that the recovery crew would get in touch with me no larger than 9am that morning, and that is exactly what happened.

Not long after, a crew arrived, inspected the damage, took photos, asked a squillion questions and set about their recovery task.

This included me having to move the entire contents of my wife’s sewing room, including books from the built in bookshelves, many, many  bolts of fabric, more reels of sewing thread than I thought possible for one individual to possess and enormous rolls of wadding.

The only available dry space was in the lounge/dining room so that is where it is all now located.

Fortunately, my wife had left for golf before the crew arrived and was spared from the heavy lifting.

When turned on, the volume of heated air lifted the carpet away from the floor to the extent that each area gave the appearance of a kids jumping castle.

The recovery crew were at pains to explain that because the carpet was wool and the underlay rubber based, over concrete, it would take some time to totally dry before replacement or renovation could be determined.

In response to my question of how long would the process take, I was informed at least five days with the machines running 24 hours a day.

Additionally, a builder would be required to remove the built in bookcases and the bathroom vanity. This could not be undertaken until the drying was completed.

The fans are working overtime, you can tell because the noise is almost unbearable.

We had been offered motel accommodation by our insurer but as the Easter weekend holiday was upon us, there was no opportunity to have our four legged pets cared for in a cattery so a move was out of the question.

I’m now sleeping on a camp stretcher in the shed, my wife is on another camp stretcher at the furthest end of the house. At least there the noise is reduced to no more than a whisper.

On the positive side, the whole house wasn’t inundated as my wife woke before major damage was done. We also had a large supply of old bath towels which we flung across the deepest water pools and I was able to reach the stopcock in a reasonable time.

Additionally, I can advise that the stainless steel mesh covered rubber tubing used to connect the mains hot water to all taps in the house have a tendency to rupture. A plumber has advised me to inspect them regularly and replace them all, including the cold water hoses every ten years or so.

Another positive was that it has provided a break from the day to day monotony and I was able to make a few quick images of the damage using the iPhone.

Here a few of them for your amusement.

The start of the inundation just outside the ensuite. 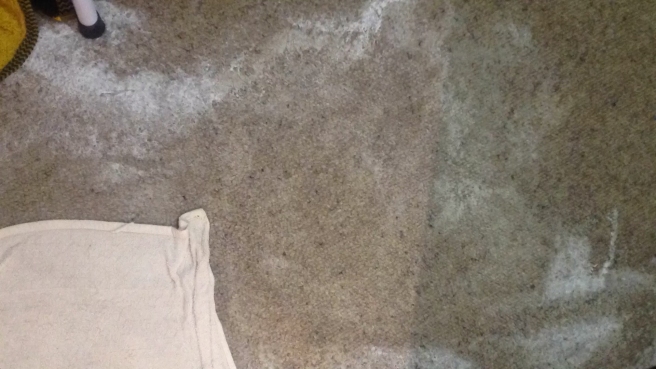 A bit more, this time with addition of some soap from inside the vanity unit. 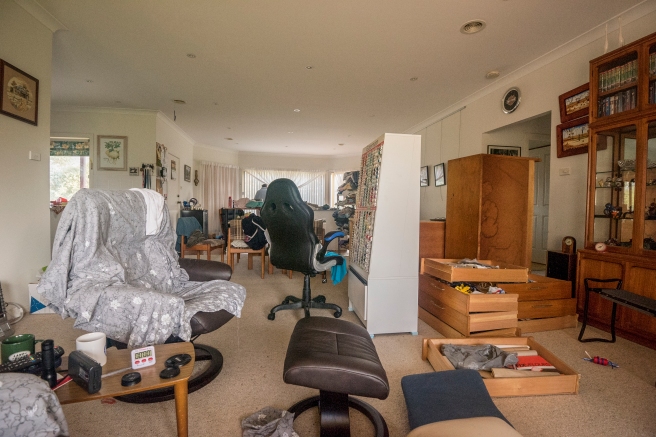 Some of the contents from the sewing room.

Just another view of chaos ville.

The main bedroom and the humidifier. The purple object is to prevent the carpet from flapping against the walls.

The chest of drawers to the left of the image is about to be moved too. Luckily the bed can stay; for the moment. 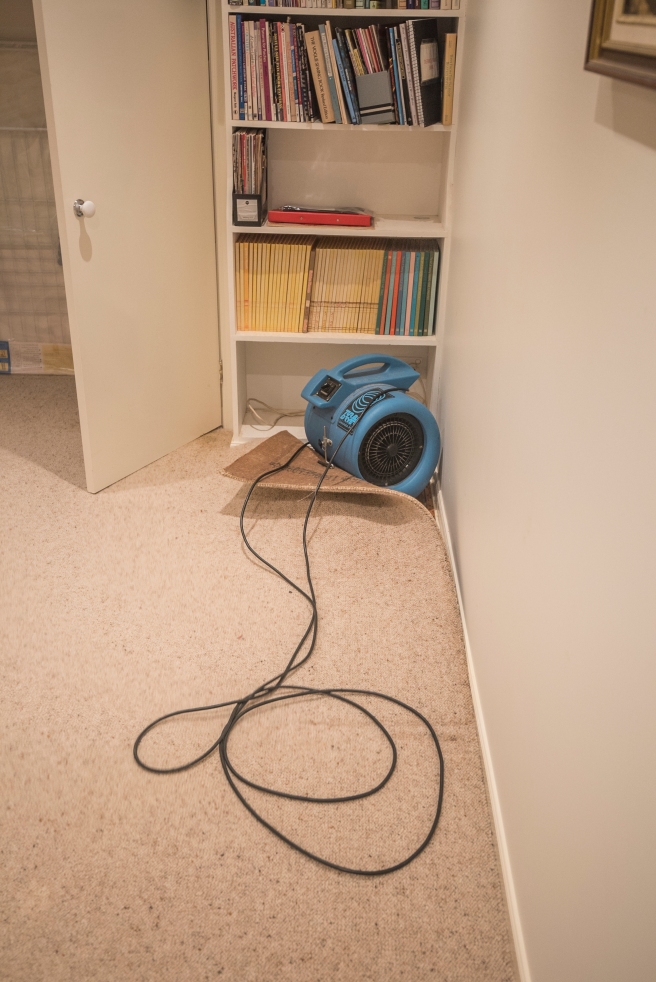 One of the blowers beside the floor to ceiling book case that has to be removed by builders.

A blower in the bedroom.

Another in the ensuite.

Yet another in the walk in robe.

By the end of next week the builders will have been and gone, the assessors will have determined what will or will not be replaced and life in Cassa Creakingbones will return to normal, if normal is ever the norm here.