The Australian landmass has always been well known for its droughts, floods and bushfires.

The country has been enduring extreme drought conditions for over a year now and water restrictions at various levels have been implemented in many areas.

Although Casa Creakingbones is connected to the town water supply, many years ago SWMBO and I had contractors sink a bore and we also installed three 20,000 litre rainwater tanks. These mesures have ensured that at least we can  retain some green grass around the house and if circumstances require it, our rain water tanks can be utilised for drinking water and household use.

Fortunately, our town is generally not endangered by bush or grass fires.

However, for the past few weeks many areas of Australia have been ravaged by ferocious bush fires including areas less than 100 klms from here.

The South Coast of New South Wales is a summer/Christmas/New Year holliday destination for thousands of people and its beaches and natural beauty are second to none.

However horrendous bush fires are now burning across hundreds of kilometers of the South Coast with mass evacuations and power, communications , fuel and food either unavailable or in short supply. Over 50,000 homes along the South Coast are now without power.

Since last Monday the 30th December 2019, seven people have perished in the fires, people are missing,  small towns have been totally destroyed and hundreds of houses and out buildings have been razed to the ground by the fires.

The Bush Fire Brigade volunteers and professional firefighters are doing a magnificant job protecing property and saving lives. They are being assisted by the armed forces who have been committed by ther Prime Minister, Scott Morison.

Total fire bans have been declared in many areas of the State, including our local government area. This means that even the outside use of BBQ’s is totally prohibited.

The main impact on us is air quality. For a few weeks now, like the Sydney metropolitan area, many  town on what is known as The South West Slopes have have been enveloped in smoke haze generated by the bush fires.

As we are residents of the South West Slopes, air quality has become a major problem, particularly for sufferers of asthma of whom I am one. Venturing outside for any length of time is risky, particularly if physical activity is involved.

Here are a few images taken around Casa Creakingbones in the last week or so: 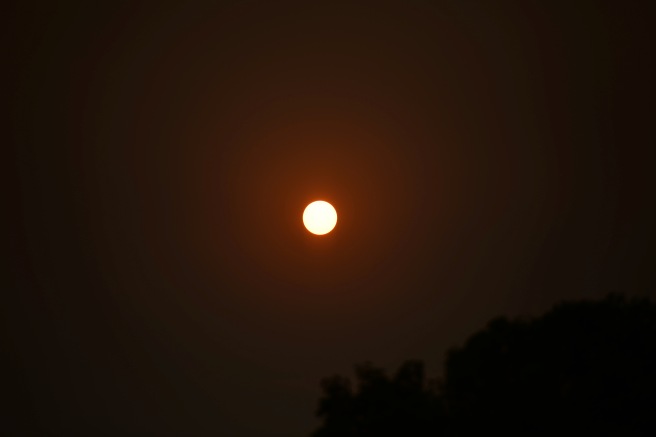 The weather forecast for next Saturday, 4th January, 2020 is for temperatures in excdess of 40 degress celsius or 104 degrees farenheight if you haven’t gone metric.

Either way, it’s going to be bloody hot.

However, please spare a thought for the people across NSW and the rest of Australia who have lost everything in these dreadful fires.