Big suits the Australian psyche. We like all manner of things that are big.

Many Australian towns like to exhibit the big things they are famous for. 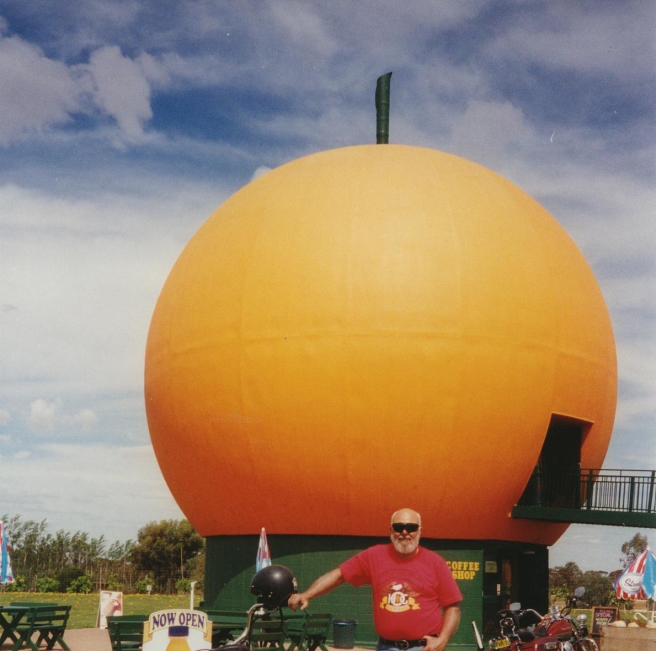 Then there are the big cattle stations.

The Kidman Pastoral Company holdings run to 101,000 square kilometres. That equates to a mere 38,996.31 square miles, roughly a shade more ground than twice the size of Switzerland.

Now for many years, Australia prided itself as being’Home on the Sheeps Back’ and the Merino sheep was a sure prize winner. The popularity of synthetics has put a dent in wool prices but in my home town, the sheep is still a good earner. So much so that we have the Big Merino looking down on us as you enter town from the south. As winter approached the local Knitters Guild got together and knitted “Rambo’ as he is affectionally known a giant scarf.

It took a bit of effort to dress ‘Rambo’ but it was worth the wait. Even from a bit of a distance he looks impressive.

Now you might ask, why a Merino Ram. There are lots of other breeds in the district. The answer could possibly be found some years back when a local marino fine wool producer achieved a world record price of A$ 2,690 per kilo at auction.When you think that the average weight of a bale of wool is 204 kilos, that bale brought in a lot of money .

Now our town is not satisfied with just a Big Merino. Oh no, we have a Big Snail too. We did have two of them but a tree fell on one and rendered it the way most of us prefer garden snails. This is the survivor in its original spot.

However the powers that be decided that the snail needed another home and mysteriously one night it crawled up to the local art gallery and positioned itself on the concrete right next door. No wonder it looks miserable. Not a blade of grass to be seen. 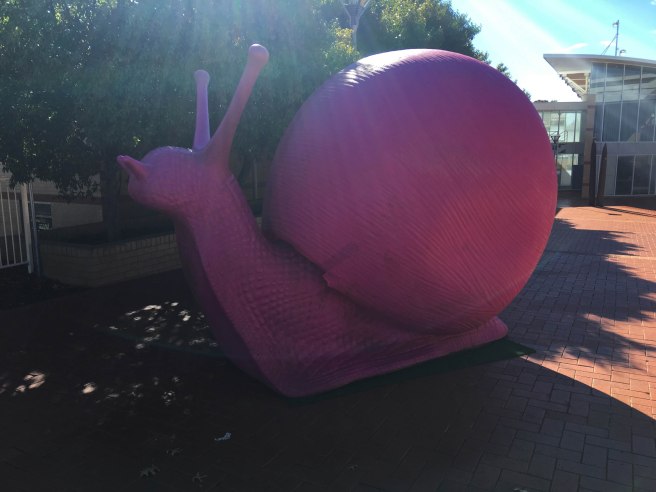 As I mentioned earlier, we like big things here in the Land Down Under. Take this ant hill for example.

Termites made this little beauty  on the side of the Plenty Highway which runs from the Northern Territory in to Queensland. That’s 5 foot ten inches of She Who Must Be Obeyed giving you the idea of the hight of the mound.

Then of course there is Australia’s favourite mesa, Mt Connor in the Northern Territory, often mistaken by first time visitors for Uluru (Ayers Rock as it was once known) which is located some miles further along the highway.

Then we have our big rock collection called the Bungle Bungles located in West Australia. 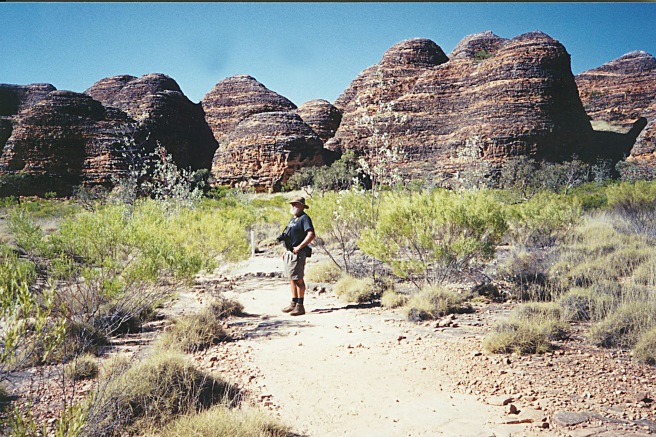 Then or course, we have some big holes, take Wolf Creek Meteorite site in West Australia for example. Imagine the noise and destruction as the meteorite struck the ground. I can tell it takes a lot of energy to walk from one side of the crater to the other. Then you have to walk back, scale the crater rim and then walk back to your four wheel drive.

Now I mentioned our love of big rivers. That includes rivers like the Finke River in South Australia that is dry more often than it is flowing . I grabbed this shot where some wag had stuck a kids bike frame right in the middle of the crossing. Like everyone else I drove round it and left it for the amusement of others. 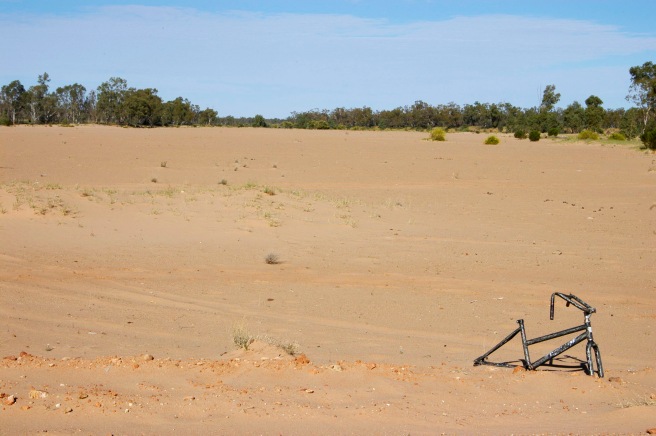 Then of course there is my obsession with outback Australia where we can find a ‘Whole big lot of bugger all.’

However, there are plenty of living things that have adapted and thrived in our arid outback. Take this goanna or Perentie to give it its proper name.

This bloke was a shade under 6 foot long and was on his way to find a decent sun baking spot when we stopped to take the ‘Whole Lot of Bugger All’ photo.

Now the goanna was fortunate that he didn’t leave his track crossing until a little later because big rigs don’t stop out in this area for anything. This big bloke rattled past in a big heap of dust with just a toot on his air horn.

There are some really big dangerous critters lurking around northern Australia  including our Salt Water Crocodiles that account annually for quite a number of deaths among the unwary who venture into their territory. There are signs everywhere warning about them but fortunately, the fresh water crocks are not so dangerous. This bloke, a shade over 7 foot long was sunning himself/herself beside a creek crossing on Mt Stanford Station in the north of West Australia so I pulled up and grabbed this image as the big bloke slipped under the greenery floating on the still water.

It amused me as the crock kept an eye on me as I took the shot. With the camera of course. All of these beauties, salties included are protected.

We are fortunate or unfortunate, depending on your outlook, in Australia to have one of the worlds largest mobs of wild camels. In the Northern Territory they are in plague proportions and popup everywhere. This inquisitive beauty was fascinated by our Landrover near our camp at Chambers Pillar in South Australia.

Chambers Pillar is a magnificent, big, rocky outcrop used by early explorers as aid to navigation. What a great big shapely rock. 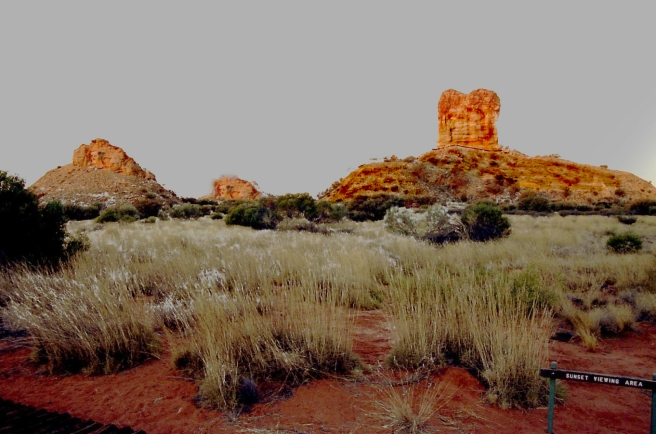 My excuse for being so longwinded and bombarding you with eighteen images is simply because todays subject is BIG.

It was a BIG but enjoyable task selecting the images and I must confess that the only image I took today is of the snail in the courtyard. Used the iPhone too, Not my BIG Nikon.

So, hoo roo till tomorrow.