As time goes by, the value of some treasures increase, whilst others decrease.

For example, many years ago, prior to 0ur umpteenth house move, my parents decided to get rid of trinkets, mementos and documents they deemed to be of little or no sentimental value.

I just wish I had them now. Perhaps that is one experiences from my youth that has turned me into a bower bird. I find it extremely difficult to discard anything of a personal nature and, come to think of it, discard anything at all.

So you can imagine my dilemma when faced with making a selection of ‘Treasure’ when I’m surrounded by the things I deem to be ‘My Treasures.’

On reflection I thought that as my father has been dead for fifty years this year I’d use  ‘Treasures’ that formed a bond between the two of us.

My Dad was a chain smoker, there was always a ‘smoke’  between his lips from morning till late at night. He always kept his ‘smokes’ in his favourite cigarette case and I photographed it just a few minutes ago. 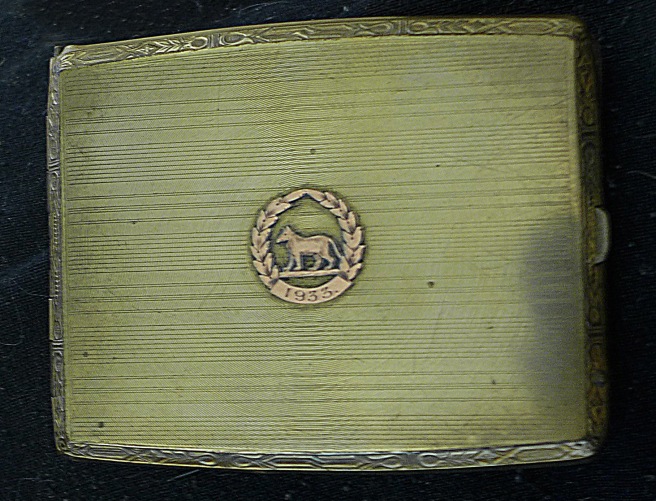 It bears the image of a wolf, appropriate as Dad’s nick name was’The Lone Wolf’ as, according to friends who knew him he preferred the company of books to that of people.

Religion and music also played an important part in my dad’s life. He found the Church to be a haven where his fine tenor voice and keyboard skills on both organ and piano where utilised to the full by the local clergy from quite a number of denominations.

Dad tried for years to get me to take up smoking, singing, musical instrument and the Church but failed miserably.

As a lay preacher in the Church of England, he was bitterly disappointed that I only attended church when the regular parson was absent and Dad took the service. Strangely too, when Dad was practising his sermon on me it felt like punishment, not deliverance.

So, by the time I was twenty one and left home, I was sick and tired of Latin, Greek,Hebrew, French and German( the latter two from my Mother) and religion.

I knew of course that my father was a practising Mason and one day out of curiosity when visiting, I asked him to explain to me what was the attraction of freemasonry.

By the time he had finished I was convinced that Masonry was for me.

A few years later I joined Dad at his Sydney Lodge and eventually became a fully fledged Mason.

Now most people know that Masonry has a firm basis in religion and I found its application in the Lodge satisfying.

As a fresh faced Mason I was presented with a Holy Bible and it has become one of my great treasures. It sits proudly in my book case alongside my Dad’s and my Father in Law’s. Here they are together. 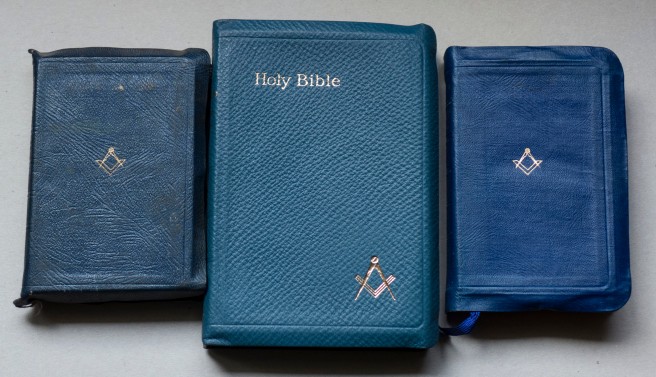 Dad’s bible is on the left, mine in the centre and my Father in Law’s on the right.

I get a really nice feeling when, from time to time, I look in Dad’s bible instead of mine for a reference . That’s probably why mine looks in such pristine condition.

I held onto Dad’s regalia too and it sits, together with mine, and, in a way keeping us both close over the years.

Mine’s only fifty years old and Dad’s must be well over 90 years. You can see from the following photograph that mine shows little or no sign of wear but that’s a story for another day. 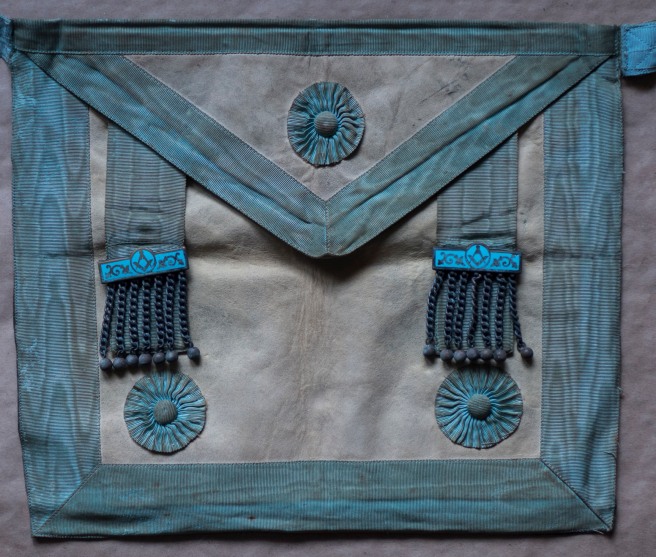 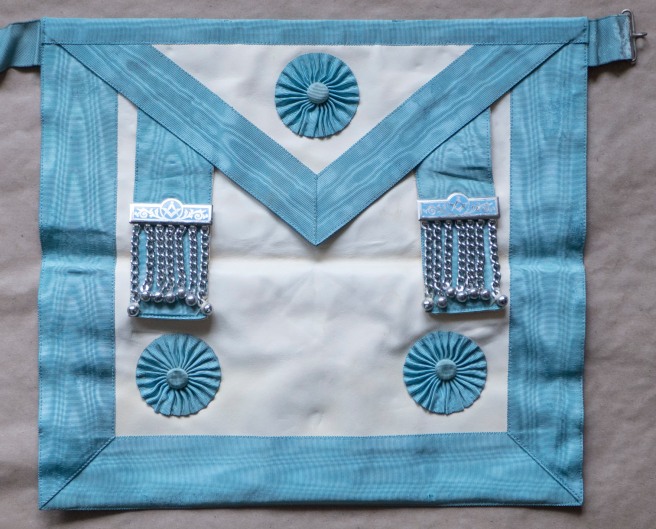 So, there we are, three of my treasures from days gone by.